With 25 cruise ships to choose from, selecting the best Royal Caribbean ship is no easy task. But, as Royal Caribbean groups its ships into classes, choosing the class of ship with the facilities that you want to experience is a great way to start your cruise planning.

In this guide, I’ll show you what to expect from each of Royal Caribbean’s ship classes. I’ve also made a handy chart so that you can compare the classes side-by-side.

In this guide:
[hide]

How many ship classes does Royal Caribbean have?

So, are the new Royal Caribbean ships better than the old ones? Well, not always. Each class of ships has its pros and cons. So, read on to discover more.

Each of these seven classes has between two and five ships in it. The ships within a class are ‘sister-ships’. This means that they’re all built to a very similar design, they have the same outer shell, if you will.

However, the ships in each class are not identical. They were each built to be slightly different. Then, between 2018 and 2020, some of the ships were ‘amped’, which means that they had a thorough refurbishment and lots of extra facilities added.

One key difference between the different classes of ships is the size. This is important as the largest of Royal Caribbean’s ships (Oasis Class) are almost three times the size of the smallest ships in the fleet (Vision Class).

So is bigger better? Well, not always. Many people (myself included) love the Oasis-class ships because they have so much to do on board. There’s even a park in the middle with over 10,000 real plants and trees!

However, the largest cruise ships are just too big to dock at some ports. So, if you want to go island hopping around Greece, for example, you’ll need a smaller ship.

Tickets for the smaller ships tend to be cheaper, and there are some real bargains to be had. If you don’t have kids and don’t want to do surfing, zip-lining and all of that, then there’s no point paying extra for a ship that has activities that you won’t take part in.

To help you decide which class of Royal Caribbean ship is best for you, here’s a chart showing the features you can expect on board:

Still not sure which class to pick? Here’s an overview of each of the Royal Caribbean ship classes…

Royal Caribbean’s Quantum-class ships are the most innovative of all. They have unique features like the North Star observation pod, the RipCord by iFLY skydiving simulator and bumper cars – all things that you simply won’t find on any other cruise ships in the world.

When Royal Caribbean began building Quantum-class ships, it was the first time that the line had ever decided to build ships smaller than those that had come before. Usually, cruise ships have gotten larger over the years. That said, Quantum-class ships are by no means small, most have space for 4,180 guests at double occupancy and 4,905 if every bed is full.

Quantum-class ships are ideal for cold weather sailings such as those out of New York or Southampton. There’s an indoor pool and lots o indoor activities to enjoy when you can’t sunbathe out on the open decks.

If you’re wondering what the difference is between Quantum Class and Quantum Ultra Class, the answer is not much. Quantum Ultra-class ships each have Sky Pad virtual reality trampolines on the back and the indoor pool has a retractable roof for sunnier days. There’s the addition of a Playmakers sports bar, a karaoke lounge and a tea room, but these come at the loss of the pub and teen disco.

Royal Caribbean’s Oasis-class ships are the biggest in the world with space for over 6,600 guests. These massive ships are so wide that they have a hollow centre where you’ll find the huge Central Park with thousands of plants, the Boardwalk complete with a carousel and a zip-line over the top of it all.

Most Oasis-class ships feature the tallest slides at sea, the 10-storey Ultimate Abyss as well as loys of thrilling water slides. As well as ice skating, there is also a roller skating rink as well as the AquaTheater where you can watch the most spectacular high diving shows.

They may be a little older and a little smaller, but Freedom-class ships have plenty to enjoy. Refurbishments of these ships have seen the addition of lots of exciting features such as The Perfect Storm Waterslides, escape rooms and laser tag. Independence of the Seas also has the SkyPad trampolines.

While you won’t find any of the over-the-top activities that are unique to the Quantum and Oasis Classes, you can enjoy mini golf, basketball and ice skating as well as the things that all ships have like the casino, spa and swimming pools.

Royal Caribbean’s Radiance-class ships are known for their views as they have lots of glass walls, glass elevators to outside and some wonderful viewing areas. As these ships can access smaller cruise ports, you’ll find some really interesting itineraries to places like the Panama Canal, Alaska, the Eastern Mediterranean and Australia.

Radiance-class ships are the only Royal Caribbean ships to have self-levelling pool tables – something that was quite special when these ships were launched in the early 2000s. You won’t find any waterslide on boards, but there are still some small slides for kids.

While they may be around 20 years old, Voyager Class ships still have a lot to offer, especially since these ships were amplified to add things like waterslides, laser tag and escape rooms.

The actual offerings vary by ship though, so you’ll want to check more closely if there’s a particular activity that you want to try. For example, when comparing Mariner of the Seas and Navigator of the Seas, you’ll see that one has virtual reality trampolines, whereas the other has a better pool deck with bigger waterslides.

While many areas on these ships are brand new, they can still feel a little dated, particularly in the staterooms and some of the bars.

The smallest and oldest ships in the Royal Caribbean fleet, Vision-class ships shouldn’t be overlooked. If you don’t mind the lack of bells and whistles, you can find some great deals on cruises on these ships.

Like all Royal Caribbean ships, you can enjoy rock climbing walls, arcades, casinos, spas, pools and whirlpools. There’s also the Adventure Ocean kids club to keep your children entertained, making these ships a good choice for families and couples alike. Enchantment of the seas also has a bungee trampoline.

Cruises on Vision-class ships are often destination-focused, such as longer Caribbean cruises that explore some of the lesser-visited islands in the Southern Caribbean.

1. Compare prices from every travel agent in one place.

2. Choose a trusted travel agent with a best price guarantee.

Please don’t book with any old company just because they have a cheap deal. I suggest that you find the best price and then take it to a trusted travel agent who will beat it as well as giving you the best service.

Which Royal Caribbean ships have iFLY?

Which Royal Caribbean ships have a carousel? 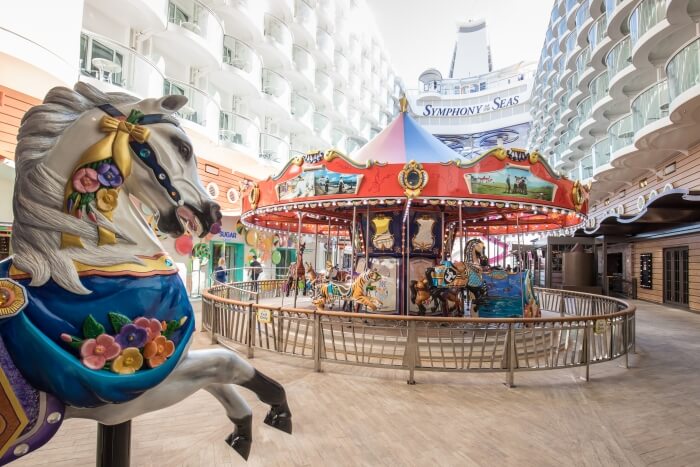 Which Royal Caribbean ships have Wonderland?

Royal Caribbean’s Radiance-class ships have small waterslides for kids, but no slides for adults.

Which Royal Caribbean ships have Playmakers?

Which ships have the Royal Genie?

Which Royal Caribbean ships have FlowRider?

Around half of all Royal Caribbean cruise ships have ice skating rinks onboard where you can go ice skating and watch professional ice shows. These are the Oasis-class, Freedom-class and Voyager-class ships.

Understanding the different classes of ships is a good starting point when choosing a Royal Caribbean cruise. If you love the idea of having fun activities around every corner, then you’ll love the Oasis Class, Quantum Class and Quantum Ultra Class ships, as well as the new Icon class that’s coming soon.

However, if you most look forward to visiting different destinations and relaxing with a cocktail, then the older and smaller ships will suit you just fine.

Remember, that not all ships in a class are identical, so be sure to take a good look at the deck plans and Royal Caribbean’s website to make sure that you know what you’re getting when it comes to booking your cruise.

If you’re planning to stay in a suite, you should also know that Royal Caribbean’s suite perks are a little better on the Oasis Class, Quantum Class and Quantum Ultra Class ships than they are on the older ships.

You should also take note of what’s included in a Royal Caribbean cruise as some of the activities do cost extra.

2. Book with a trusted travel agent - Here's who I recommend


Found this to be useful?

You're welcome to share this guide with your friends if you think it may help them too.

My name’s Jenni and I’ve worked in the cruise industry since 2015.

I'm proud to help over 500,000 people plan their cruises every month via this website.

Book Your Cruise For The Best Price

In the UK - I book my cruises with Cruise118 because they have a best price guarantee.

In the US - Get the best price guarantee when you book online with Cruise Direct.

For river cruises and ultra-luxury - I recommend Panache Cruises.