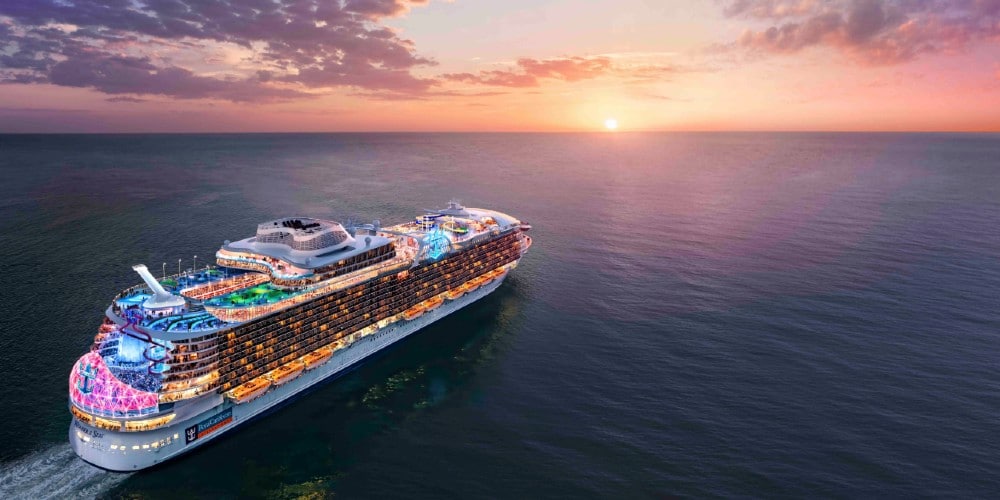 This post may contain affiliate links. If you click one, I may earn a commission at no cost to you.

Royal Caribbean currently has 26 cruise ships, with two more being built and on order. This post has a list of Royal Caribbean ships by year built, ordered from newest to oldest.

What is the newest Royal Caribbean ship?

In 2020, the newest Royal Caribbean ship is Spectrum of the Seas which was launched in April 2019. This Quantum Class ship sails out of China and was specifically designed for Chinese guests. The primary language on-board is Mandarin and all signage and announcements are in simplified Chinese, followed by English.

Which is the next Royal Caribbean ship to launch?

Royal Caribbean’s next ship will be Odyssey of the Seas. This ship was due to launch in November 2020. However, shipyard closures due to the global pandemic have resulted in the launch of this ship being pushed back to April 2021.

Read more about Odyssey of the Seas

What is the oldest Royal Caribbean ship?

What’s the difference between old and new Royal Caribbean ships?

There are several differences between the older and newer ships in the Royal Caribbean fleet. These are:

Royal Caribbean ships have increased in size as time has passed with the newer ships being much larger and with the capacity for more passengers compared to older ships.

You won’t find any of these things on the older ships. However, every Royal Caribbean ship does have swimming pools, a rock-climbing wall, an arcade and a kids’ club.

Each cruise ship sails out of one or two ports. In some cases, ships are based in Europe in the summer and the Caribbean in the winter. Many cruise ports have a limit as to the size of ship they can accommodate. For this reason, Royal Caribbean uses its smaller, older ships to visit destinations that are not accessible to megaships.

Itineraries on smaller, older cruise ships are often more port-intensive with fewer sea days. With the newer ships, the ship itself is often the attraction rather than the ports of call, so you may have more days at sea.

As the newer Royal Caribbean ships have so much to do on-board, they tend to attract a younger crowd of families with children and younger couples. Older ships tend to be more popular with older couples and retired people.

The atmosphere on-board the oldest and newest Royal Caribbean ships is somewhat different. This is in part down to the passengers on-board, as older ships tend to attract fewer children and an older, more relaxed crowd. You probably won’t find the nightclub to be pumping late into the night as it will be on a new ship.

Also, the decor of the newer ships will be much more modern. Royal Caribbean cruise ships are refurbished every three years, so the oldest ships are always in good condition, but the decor may look a little dated in some places in comparison.

The older Royal Caribbean cruise ships are much cheaper than the newer ones. Frequent cruisers are always excited to try the nexy new ship, so cruises on brand new ships are priced at a premium to reflect the demand for them.

If you’re cruising on a tight budget, you can save a lot by choosing one of the older ships.

I’m Jenni and I live in Bolton, UK with husband Matt, six-year-old Leonie, three-year-old Adam and our two dogs.

I offer tips and advice to help you find your perfect cruise and make the most of your time at sea.