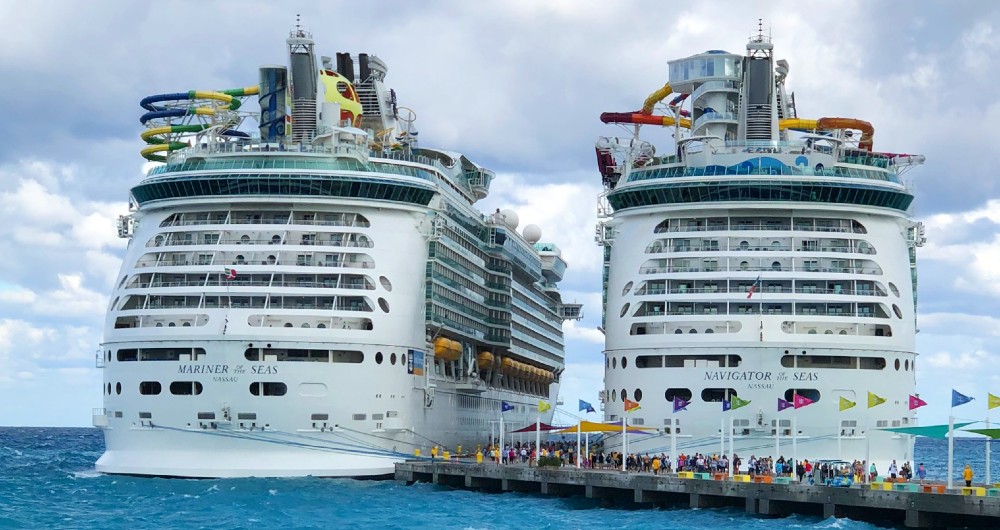 This post may contain affiliate links. If you click one, I may earn a commission at no cost to you.

Mariner of the Seas and Navigator of the Seas are sister ships with very similar Bahamas itineraries. This means that cruisers are often left wondering which ship to choose for the best cruise.

What are the similarities and differences between Navigator and Mariner of the Seas? And which ship is the best? Read on to find out…

Some background on Navigator and Mariner of the Seas

Navigator of the Seas was launched in 2002, with Mariner of the Seas following shortly afterwards in 2003. They are both Royal Caribbean Voyager-class ships, along with Adventure, Explorer and Voyager of the Seas.

Both Navigator and Mariner of the Seas have undergone Royal Caribbean’s ‘amplification’ programme which upgraded the ships and added new facilities such as the water slides. Mariner was ‘amped’ in 2018, followed by Navigator a few months later in 2019.

Mariner and Navigator of the Seas have many of the same activities on-board, with a few key differences.

One of the main differences between Mariner and Navigator is the pool deck. The pool deck on Navigator of the Seas is nothing short of amazing! It’s bright and colourful with a real tropical vibe, in contrast to Mariner’s pool deck which looks a bit bland in comparison.

On Navigator, the hot tubs have been moved upstairs for the best ocean views, which has made space for a small splash area by the main pools. If you love spending time by the pool or have young kids who want to splash around, you can’t beat Navigator of the Seas.

Mariner of the Seas water slides are called Typhoon and Cyclone. These are pretty tame, they’re quite slow and you don’t get your face wet. The height restriction is 48″ minimum.

Take a look at the video I made of these slides…

The slides on Navigator are not only better, they’re also suitable for younger kids, making them a win-win.

Navigator of the Seas may have the best pool and the best water slides, but sister-ship Mariner of the Seas has a couple of extra tricks up her sleeve.

Mariner features the Sky Pad which is a virtual reality trampoline up on Deck 13. Next to that is the Sky Climber – a huge enclosed climbing frame which was a real hit with my five-year-old.

Also, on Mariner of the Seas there’s a really cool window where you can look down into the bridge and watch the crew as they navigate the ship. Look out for that.

The following table shows which activities you’ll find on Mariner and Navigator of the Seas.

Winner – Mariner of the Seas

The slides might be better on Navigator, but Mariner has slides too and some really cool stuff like the virtual reality trampolines and the Sky Climber.

The two ships each have the same bars and lounges, although sometimes they have different names. For example, each ship has a lounge up on Deck 14. On Navigator, this is called the Cosmopolitan Club, whereas on Mariner it’s called the Jazz Club. They’re essentially the same.

Navigator of the Seas does have a couple of extra bars – The R Bar is a retro cocktail bar on Deck 5. Then there’s also ‘To Dry For’ where you can enjoy a drink while you have your hair blow-dried ready for the evening ahead.

Also, Navigator of the Seas features the Lime & Coconut which is similar to the Pool Bar on Mariner, but better and with more outdoor seating.

The following table shows where you can enjoy a drink on each ship.

Winner – Navigator of the Seas

Navigator is the clear winner here, with more bars to enjoy and a better poolside drinking experience.

Most of the complimentary dining venues on each ship are exactly the same. You’ll get the main dining room, the Windjammer buffet and Cafe promenade.

Mariner of the Seas has the Dog House which offers poolside hot dogs, whereas on Navigator of the Seas the poolside food offering comes in the form of Mexican snack bar, El Loco Fresh.

For the most part, the two ships have very similar speciality dining options, but Navigator has one more – Hooked Seafood.

Izumi features on both ships, but with some differences. On Mariner, it’s a Habachi restaurant with tableside show cooking and a fixed price. On Navigator, however, Izumi offers a Hot Rocks experience and has a la carte pricing.

The following table shows the dining venues on each ship.

Winner – Navigator of the Seas

El Loco Fresh trumps the Dog House every time. This casual Mexican cafe offers burritos, carnitas and more which you can customise as you desire. If you’re a vegetarian or vegan then the Dog House has nothing for you, whereas El Loco Fresh has plenty.

Each Royal Caribbean ship has a home port where guests embark and disembark the ship. These are as follows:

Both ships depart from Florida, but you might want to put some thought into which airport is easier to fly into.

Mainer of the Seas and Navigator of the Seas are fantastic ships to cruise to Nassau and Royal Caribbean’s private island – Perfect Day at CocoCay.

Both ships offer three- and four-night Bahamas cruises with changeover days on Mondays and Fridays.

From November 2021, Mariner of the Seas will stop offering three-night cruises and instead offer five-night cruises to the Eastern or Western Caribbean (alternating).

The following table shows which ports of call are available for each ship.

Winner – Mariner of the Seas

Mariner of the Seas are both fantastic ships and it wouldn’t be fair to say that one was any better than the other. However, there are some subtle differences between them. If in doubt, take a close look at the itineraries on offer and any differences in price once you’ve factored in flights before making your decision.

I’m Jenni and I live in Bolton, UK with husband Matt, six-year-old Leonie, three-year-old Adam and our two dogs.

I offer tips and advice to help you find your perfect cruise and make the most of your time at sea.