If your vacation includes some time in Cozumel, you may be wondering if there are any beaches where you can sunbathe topless or even nude.

The topless beaches in Cozumel aren’t well advertised but they do exist. And there are also a few quiet spots where you’ll be able to sunbathe naked without causing alarm, if that’s what you choose to do.

Personally, I’m British, so topless sunbathing is a totally normal thing for us to do! Probably not in England (it’s too cold!), but when I’ve travelled to countries like Spain, France and Greece, it’s been common for most women to be topless, even on family beaches with kids around.

And yes, I’ve sunbathed topless myself many times.

Is topless sunbathing legal in Mexico?

Topless sunbathing in public is technically illegal in Mexico. However, the law is very rarely ever enforced, especially on tourist beaches in places like Playa Del Carmen.

Can you sunbathe topless in Cozumel?

If you want to sunbathe topless in Cozumel, here’s where you can go…

Mezcalitos is a fun little beach bar located on the East side of Cozumel. It’s the first beach that you’ll come to when you arrive at the coast via the ‘transversal’ road that goes right across the island. 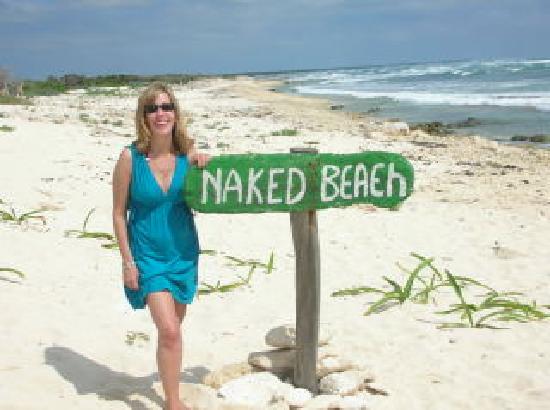 This photo of Cozumel is courtesy of Tripadvisor

There’s a ‘Naked Beach’ sign at Mezcalitos, but it’s mostly just for novelty purposes. Most people do wear clothes, but if you really do want to sunbathe nude or topless here you should have no problem.

If you’re feeling shy, you’ll probably want to walk a little further down the beach away from the people. But, the further you go, the rockier the sand gets.

Here’s a video of the bar and beach at Mezcalitos.

Mezcalitos is 12 miles from Cozumel Cruise Terminal, on the opposite side of the Island. The easiest way to get there is to take a cab.

Coconuts Bar and Grill is a fun bar on the east coast of Cozumel. With bras and thongs hanging from the ceiling, this place isn’t to everyone’s taste, but if you want to visit somewhere light-hearted with great sea views, you should give it a shot.

At Coconuts you can get your photo taken topless in exchange for a free tequila shot. The photo then goes into an album which is passed around for future guests to admire.

While you won’t find many women sunbathing topless at Coconuts, if you want to sunbathe topless on the beach, you can do. Just tell the staff that’s what you want to do and you may even get free drinks while you do it!

Here’s a video of Coconuts Cozumel…

Coconuts is 15 miles from Cozumel Cruise Terminal, on the other side of the Island. The easiest way to get there is to take a cab.

Freedom in Paradise is a beach bar that’s located across the road from another bar called Rastas – both are owned by the same family. You’ll find it on the south east coast of Cozumel.

There’s a topless beach at Freedom in Paradise and, just like at coconuts, you’ll get a free tequila slammer for participating. Most people choose to keep their swimwear on, but if you want to go topless on the beach, you can do.

Here’s a video of Freedom in Paradise and Rastas…

Freedom in Paradis is 15 miles from Cozumel Cruise Terminal, towards the southern tip of the Island. The easiest way to get there is to take a cab.

Are there nude beaches in Cozumel?

Cozumel’s famous ‘Naked Beach’ sign can be found at Playa Mezcalitos, a small beach just beyond Mezcalitos bar on the east coast of Cozumel. However, the sign is mostly just for fun and few people actually sunbathe nude here.

If you want to sunbathe nude in Cozumel, the best thing to do is to find a quiet, secluded beach. Cozumel has miles of beaches so you should have no problem finding a nice beach away from the bars and resorts where you can have the whole place to yourself.

Palancar is one option to consider. It’s located towards the south of the island, about a 15-minute drive from the cruise terminal. You could rent a scooter or a jeep and explore the area.

Another option is to head towards the east side of the island where the beaches are almost deserted. You should be aware though, that swimming may not be an option as the sea can be very rough. Plus, there may be no mobile phone reception so if you take a cab you should be sure to book it both ways.

As topless sunbathing is technically illegal in Mexico, it’s not something that you’ll see happening often on Cozumel. The police generally turn a blind eye to topless women on beaches, although removing your bikini top isn’t recommended in most places.

If you want to sunbathe topless in Cozumel, there are a few beach bars that allow it – some will even give you free tequila slammers if you pose for a photo! Alternatively, you’ll want to seek out deserted beaches on the east side of the island where there will be no other people around to offend.

Get a Discount on Your Cruise

The price of your cruise will be different depending on who you book it with. It’s always cheaper to use a travel agent with access discounted rates.

See the best cruise deals from all travel agents in one place.

Of course, not all travel agents are equal in terms of the service that they provide, and a great travel agent is worth their weight in gold.

2. Save money - Get an exclusive discount from my trusted travel agent

My name’s Jenni and I’ve worked in the cruise industry since 2015. Read more about me.