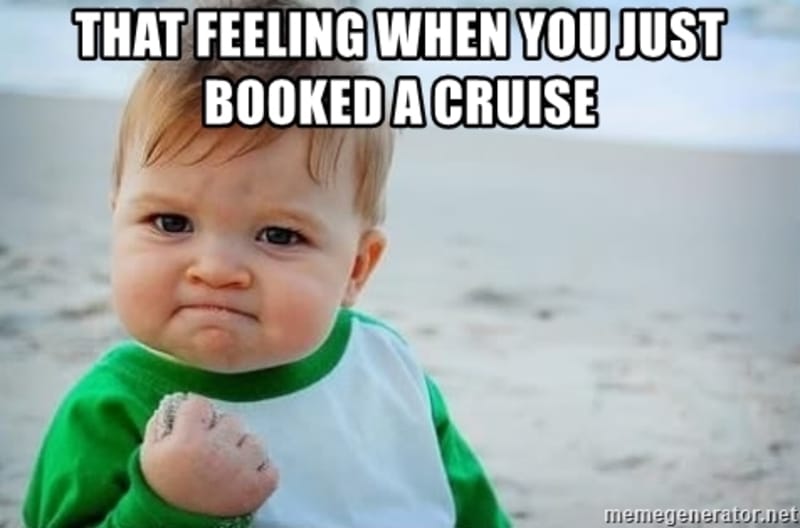 Cruise ship memes are a source of joy, with funny jokes spreading across the internet and bringing smiles to the faces of those who love to cruise.

Many cruise memes contain ‘in jokes’ that you would only fully appreciate once you’ve been on your first cruise. However, there are also some memes which can be enjoyed by both regular cruisers and those who are considering a cruise for the first time.

In this post, I’ve gathered some of the best cruise memes on the internet. Enjoy!

A meme is a funny image with text which is often copied and spread around the internet via social media.

The word ‘meme’ comes from the Greek word ‘mimema’, meaning imitated. This is because the same images are often used with different text to create different jokes.

The correct wat to pronounce ‘meme’, according to the Oxford English Dictionary is ‘meem’. Not ‘mee mee’ or ‘may may’.

Contents - Jump to a topic

Cruising is addictive, anyone who’s cruised more than a couple of times will vouch for that. The addictive nature of cruises has given rise to many funny cruise memes on the internet. Here are some of the best ones…

The abundance of delicious food served on cruise ships is another source of inspiration for funny cruise memes.

Many cruise memes about food poke fun at the weight gained during cruises (the average cruiser puts on five to seven pounds on a seven-night cruise). Memes also acknowledge the fact that it’s really difficult not to overeat with all the amazing food that’s on offer on a cruise.

Memes about drinking on a cruise

Along with eating, a popular pasttime for many cruisers is drinking, particularly if they have a cruise drinks package to take advantage of!

Anyone who’s cruised before will appreciate that the feeling of the ship rocking can be very similar to the feeling of being a little tipsy. One good thing about that is that any little stumbles can be blamed on the ocean, rather than the five cocktails you just downed.

Cruisers all love the crew, who go out of their way to make our vacations special. Some memes are aimed at passengers, whereas others are jokes that they crew themselves will find funny and share amongst each other.

Memes about packing for a cruise

It’s pretty common to have a love-hate relationship with packing for a cruise. Packing before you go can be fun, especially for those who love to book many months ahead and are very organised. Packing to leave the ship at the end of your cruise, however, is never as exciting.

Cruises can be expensive, particularly if you have a cruise addiction to feed! You’ll find some funny cruise memes online which are all about the struggle to afford a cruise, and also about racking up bills one on-board.

The weather is never guaranteed on a cruise and sometimes cruise ships have some big waves to contend with. This is the source of inspiration for many weather-related cruise memes.

A cruiser is a great place to indulge in people watching and other passengers can be the source of much entertainment, whether they’re queing for something that you wouldn’t bother to line up for, or going somewherre you’d never step foot – like the gym!

Where to find cruise memes

I hope that you’ve enjoyed looking at these memes. If you’d like to see cruise memes on a regular basis, then I’d recommend you join some of the Facebook groups such as the ‘Cruise Memes’ Facebook group.

If you’d like to make your own cruise memes, you can easily do these with an online meme generator such as MemeGenerator.net or imgflip.com.