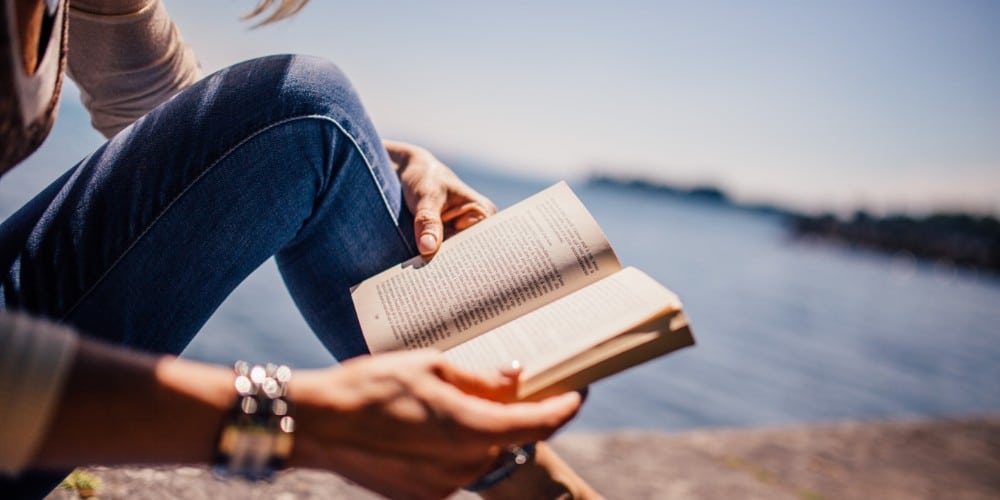 As we can’t cruise at the moment, why not mentally transport yourself to a cruise by reading a book that’s set on a cruise ship?

Whether you prefer paperback books or like to read in the bath with a waterproof kindle, you’ll find links to all the best fiction books about cruises here.

Many of these titles are also available as audiobooks, perfect for in the car or whilst you exercise. One of the best ways to listen to audiobooks is via Amazon Audible. You can get a 30-day free trial with a free audiobook here.

If you prefer real-life tales, take a look at my list of the best non-fiction books about cruising.

All of the books that have made this list have at least four stars on Amazon and are ordered starting with the most popular.

The Woman in Cabin 10 is a gripping psychological thriller set on a luxury cruise ship.

In a story reminiscent of Agatha Christie’s works, a travel journalist embarks on a week-long voyage when she witnesses a fellow guest being thrown overboard. The problem? All passengers remain accounted for and the ship sails on as if nothing has happened.

If you like cruise ship mystery books, then this series of novels is sure to keep you busy with 19 thrilling stories to enjoy.

The first book features Millie Sanders, a heartbroken lady who’s landed her dream job as an assistant cruise director on-board the fictional mega ship, Siren of the Seas. But before she has chance to settle in, she finds herself in the middle of a murder investigation.

3. Death on the Nile

This classic novel is one of Agatha Christie’s most famous mysteries. The story is set to become a movie in October 2020, directed by and starring Kenneth Branagh.

The story is set on a luxury Nile cruise. The tranquility of the voyage is shattered when a young lady is shot in the head. Time for Hercule Poirot to solve the mystery in this exotic setting where nothing is as it seems.

This thrillingly funny book by bestselling author, Carl Hiaasen, is from the popular Skink Series.

It tells the tale of marine biologist Chaz who pushes his wife Joey overboard during a cruise. Joey survives the ordeal, but decides to pretend to be dead so that she can seek her revenge on her evil husband.

Dangerous Crossing is a historical suspense thriller in the same tradition as Agatha Christie’s ‘Death on the Nile’ and Ruth Ware’s ‘The Woman in Cabin 10.’

Set in 1939, Europe is on the brink of war when young Lily Shepherd boards a cruise ship in England to start a new life in Australia. On-board, she meets new friends who are also running away from their pasts. But, by the time the cruise ends, two passengers are dead and war has been declared.

Mary Higgins Clark, the undisputed ‘Queen of Suspense’, wrote this classic novel in 1999 and it’s certainly one of her best.

The book is about a killer who targets lonely women on cruise ships. Dr. Susan Chandler starts an investigation into the phemoenon of women who disappear, only to discover that the killer may already be known to her.

This exciting series of seven murder mystery books each feature main character Rachel Prince, a newly-qualified police constable who has been ditched by her fiancé.

Each book tells the story of one of Rachel’s cruises, each of which involves a good dose of murder and mayhem. You’d think that Rachel would switch to land-based holidays, but she doesn’t!

8. Seven Days in May

If you’ve enjoyed reading any books by Kate Williams, Beatriz Williams or Jennifer Robson, then you’ll love this historical tale of love and resiliance by Kim Izzo.

Inspired by the author’s family history, this book is set during the Great War. Two New York heiresses board a cruise ship set for England, not knowing that disaster lies ahead as their ship meets its deadly fate.

This hilarious novel was the second book by Dave Barry, after his award-winning novel Big Trouble.

The book is a lighthearted comedy about murder, drug dealing, money laundering and gambling, set on the Extravaganza of the Seas, a fictional cruise ship whose sole job is to carry gamblers three miles from the Florida coast and take their money.

Murder on the QE2 is part of the popular 1990s ‘Murder She Wrote’ series of TV shows and books.

In this book, Jessica Fletcher sets sail on Cunard’s Queen Elizabeth II as a guest lecturer. A fellow speaker is found brutally murdered on the first night, and Jessica has four days at sea to find the killer before he strikes again.

Murder, Curlers and Cruises is one of the Valentine Beaumont series of mystery books by New York Times Bestselling author Liliana Hart.

In this fast-paced mystery, beautician Valentine Beaumont embarks upon a cruise where a bizarre murder takes place on-board. Funny, sexy and entertaining, this book has everything you could want in a mystery novel.

This murder mystery novel is part of the Pelican Cove Cozy Mystery Series by Leena Clover and can be enjoyed as a standalone book.

In this novel, Jenny and friends embark upon a nine-day Caribbean cruise upon Glamour of the Seas. When a game of poker turns deadly, 86-year-old Betty Sue is detained as a suspect and Jenny steps up to help catch the elusive killer.

This series of three cruise ship mystery books all feature the main character Ellie Tappet and are inspired by the cruises that author Cheri Baker has taken.

In the first book, a cruise passenger finds a finger with a big diamond ring on it in her sangria. Elllie uses her sleuthing skills to find out what happened.

Mats Strandberg is knows as the ‘Steven King of Sweden’ and this terrifying novel is sure to be a hit with horror fans.

In this book, 1200 passengers join a booze cruise between Sweden and Finland. But, in the middle of the night, the ship is cut off from the outside world. There’s no way to contact the mainland, and nobody knows who to trust.

Dead on the Water is a thrilling sci-fi suspense novel by bestselling author R.W.K. Clark.

In this fast-paced novel, a cruise ship is found to be carrying a deadly zombie-making virus. With minimal resources and no means of escape, the cruise passengers have to make some horrifying decisions.

Funny and moving, this book is about Dr Jessie Drake who takes a job on a British cruise liner. Recovering from the loss of her lover and coping with crazy cruise ship life, she reckons with her past and feels her way into the future.

There are many fiction books set on cruise ships to enjoy and this list picks out the very best ones. Whether you prefer to read paperback books, an electronic version on your kindle or listen to an audiobook via Audible, you’re sure to find a great novel for your next cruise.

Have you read any other great novels about cruising that you think should be included on this list? Be sure to let me know in the comments below.

I had a bash at story writing myself and wrote this short story which is set on a cruise ship. I’d love to know what you think of it!